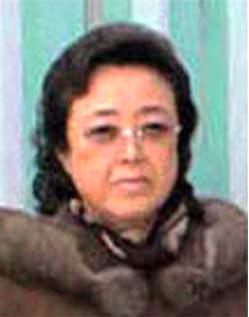 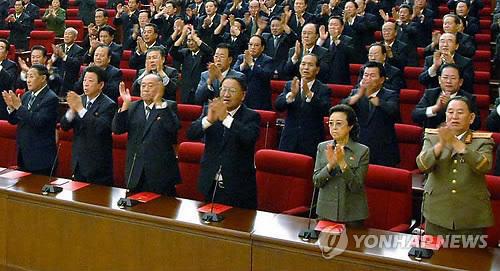 Kim Kyong-hui was born on 30 May 1946 in Pyongyang, the youngest child of the marriage between Kim Il-sung and Kim Jong-suk. She was the only daughter with two sons, Jong-il, born in Khabarovsk, Siberia in 1941, and Pyong-il born in Vyatskoye, Siberia in 1944, and drowned in Pyongyang in July, 1947. (i) From 1946 to 1950, Kim Kyong-hui was raised in Kim Il-sung’s house near Haebang Hill in central Pyongyang, the former home of the Japanese proconsul. Kim Jong-suk passed away in September 1949 delivering a stillborn.

Kim Kyong-hui entered the Political Economy Department at Kim Il-sung University in 1963. While she attended KISU, she met and began dating Jang Song-thaek, the leader of a student music group. Her uncle who was also chief of the Korean Workers’ Party Organization Department, ordered the university’s president to forbid the couple’s relationship.(iv)  Jang Song-thaek was expelled from KISU to the Wonsan University of Economics, however Kim Kyong-hui continued their relationship. They went on to attend the Kim Il-sung School for Higher Party Officials in 1966, and went abroad to study at Moscow State University in 1968. (v)

Kim Kyong-hui in 1966 when she would have been dating Jang Song Thaek.

Kim Kyong-hui began her official career in 1971, with a management position in the Korean Democratic Women’s Union. She married Jang Song-thaek in 1972.   In 1975, she became a vice director at the KWP International Department.   She was promoted to 1st vice director in 1976.(vi)  In 1977, she gave birth to her first child, daughter Jang Kum-song, and around 1979 to her second child, son Jang Kim-song.  After her 1976 promotion at the International Department, Kim Kyong-hui is not recorded as holding any official positions until 1985 when she may have headed Office #35.

In 1988 she became department director of the KWP Light Industry Department.  In November 1988 she was elected a member of the KWP Central Committee at the 14th plenum of the 6th Party Central Committee.   In April 1990 she was elected a deputy (delegate) to the 9th Supreme People’s Assembly.   In 1993 she was named department director of the KWP Economic Policy Inspection Department, where the Light Industry and Financial Planning Departments were migrated. When Kim Il-sung passed away in July, 1994, Kim Kyong-hui was ranked #47 on the funeral committee.

In 1997, Kim Kyong-hui was again identified as director of the Light Indutry Department, excised from Economic Policy Inspection. She was elected a deputy (delegate) to the 10th SPA in 1998 and the 11th SPA in 2003. She was last seen in public in a commemorative photograph of the 11th SPA in September 2003. This occurred at the same time as Jang Song-thaek’s hiatus from North Korean public life. In September 2006, their daughter Jang Kum-song passed away in Paris. 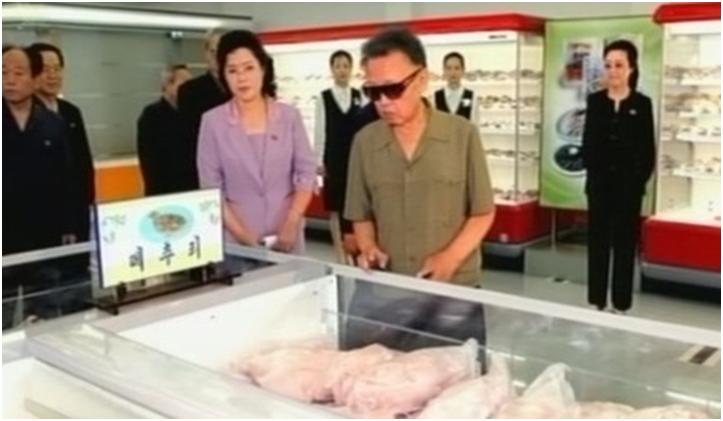 Kim Kyong Hui (R) ttending a vist by her brother to a shop in Pothonggang District, Pyongyang in August 2009 (Photo: KCNA)

Kim Kyong-hui has been a more significant public presence since her return to political life at the 12th SPA in April 2009.   For the first time in both the internal and external North Korean press, she was reported to be traveling on Kim Jong-il’s guidance tour of Hamju County, South Hamgyong.  This was also the first occasion when she was reported in the company of Jang Song-thaek.  In July 2009, she took the rostrum for the 15th anniversary memorial service for Kim Il-sung and listed as #15 in the platform order.(vii)  Her reported appearances on guidance tours increased particularly from November to December, 2009.

In 2010 Kim Kyong Hui has regularly accompanied Kim Jong Il on his public appearances.  On 28 September 2010, she was given the rank of KPA General, and elected a member of the CC KWP Political Bureau.

Kim Kyong-hui has been at the center of power for nearly 40 years. She has not only been one of her brother’s principle supporters, she has also been one of his central managers and operatives.

Kim Kyong-hui in her official capacity as director of Economic Policy Inspections and in the unofficial capacity as one of her brother’s political managers participated in inspections of factories that resulted in the incarceration or public execution of local Party and economics officials.(ix)

For three decades she has attended KJI’s banquets and parties, a superficial indication of social and political prominence in Pyongyang. Actress Choi Eun Hee dined and attended parties with Kim Kyong-hui and Jang Song-thaek in the 1970s and 1980s. Kenji Fujimoto recalled the constant presence of Ms. Kim and Mr. Jang in the 1980’s and 1990’s. (x)

Kim Kyong-hui has also been her brother’s personal representative to extended members of the Kim and Kang Family, as well as to elites from other favored Revolutionary families.  The nature of her relationships with individual personalities is not clear, and it is likely that  they are not all cordial. She has also had the sensitive task of attending to her brother’s personal life. She coordinated Kim Jong-nam’s move to Switzerland in the early 1980’s, and told his mother Song Hye-rim that Ms. Song was to be exiled.(xi)

Kim is 6th R and her husband 4th L in this commemorative photograph taking during a visit to the Migok Cooperative Farm in North Hwanghae Province in 2009 (Photo: KCNA)

With Kim Ok out of the picture, we’re instead focusing on the increased activities for Kim Kyong-hui, Kim Jong-il’s younger sister and a director at the Workers’ Party. It’s possible that the intelligence on Kim Ok’s marriage is related to Kim Kyong-hui’s emergence into the spotlight.

Kim Jong-il apparently believes that his family will not stand in the way of his third son succeeding to the leadership. There is also speculation that he is traveling with his sister and her husband to prevent possible controversy over the authenticity of his wishes if he suddenly dies or loses consciousness.

If something happens to Kim Jong-il, it would be inevitable for the North Korean leadership to rule according to his last wishes, because heir apparent Kim Jong-un,who is in his mid-20s, is considered too young to take power and thus his succession could lead to a power struggle. The source said, “There would be no controversy over the authenticity of his last wishes if two members of his family claim they have heard them.”

vi.  Kim Kyong-hui’s promotion to 1st Vice Director of the KWP International Department occurred at the same time KJI took control of the Central Party around 1976.

viii.  Among the diplomatic personnel assigned to the Ministry of Foreign Affairs or DPRK Embassies abroad are current MOFA Vice Ministers Kim Kye-gwan (representative to the Six Party Talks) and Kang Sok-ju, as well as KWP International Department Director Kim Yong-il (assigned between December 2009 and January 2010).