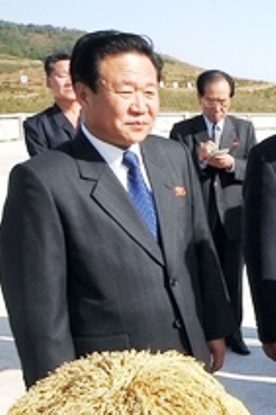 VMar Choe Ryong Hae, at the time serving as director of the KPA General Political Department (General Political Bureau) delivers a speech at an April 15, 2012 ceremony prior to a massive military parade that commemorated the 100th anniversary of Kim Il Sung’s birth (Photo: KCNA-Yonhap)

Choe Ryong Hae (Ch’oe Ryong-hae) is Workers’ Party of Korea Vice Chairman for Workers’ and Social Organizations, Vice Chairman of the State Affairs Commission and Chairman of the State Physical Culture and Sports Guidance Commission.  Choe is also a member of the WPK Political Bureau Presidium (standing committee) and WPK Central Committee, and a deputy to the Supreme People’s Assembly [SPA].  As such, Choe is one of the most powerful officials in the DPRK’s formal hierarchy.

From 2012 to 2014 he served as the Director of the Korean People’s Army [KPA] General Political Department, the political boss of the North’s armed forces.  Choe is a member of the 2nd revolutionary generation and personally knew the late supreme leader Kim Jong Il for over 50 years.  As a princeling, Choe has numerous political and social relationships with numerous DPRK elite families.

Choe’s official career began in the early 1970s when he served as a KWP political instructor at Kim Il Sung University.  He had a leading role in building Kim Jong Il’s political network in support of KJI’s succession among DPRK student and youth groups.  He was appointed director of cultural exchange programs at the Kim Il Sung Youth League [KISYL] in 1980 and elected KISYL Vice Chairman in 1981, holding both positions concurrently.  He led youth and student delegations on goodwill visits to China, Russia, Japan, Libya and Greece.  In 1986 Choe was elected Chairman of the KISYL and to full membership on the Party Central Committee.  He was also elected a deputy of the 9th Supreme People’s Assembly [SPA], where served he on the Presidium.

In 1990 he was appointed Chairman of the DPRK Soccer (Football) Association and in 1991 Chairman of the DPRK Youth Taekwando Association. In the early 1990s the youth organizations were consolidated, and its administrative hierarchy altered.  Choe Ryong Hae retained his leadership serving in the position of KISYL Central Committee 1st Secretary.  He was dismissed from this position in 1998, officially for health reasons.  However Choe was involved in unsanctioned sales of scrap metals to China (in his capacity as head of a KIS Youth League trading company).  He underwent revolutionization (political re-education) at the KIS Higher Party School and was appointed to a hardship position as a political official in Pyongyang’s public works department.

Around 2001, Choe was appointed deputy director of the KWP General Affairs Department, which is responsible for document delivery and other housekeeping tasks in the central party.  His career was restored in 2006 when he was appointed Chief Secretary of the North Hwanghae KWP Provincial Committee.  In 2009 Choe was tapped to play a leading role in the hereditary succession of Kim Jong Un and began accompanying KJU on inspections of military units and visits to industrial sites.

In the fall of 2009 Choe was selected to serve as a party official with portfolio involving military affairs and he began to appear with late Kim Jong Il at on-site visits far away from North Hwanghae Province.  Choe retained his position as the party boss in North Hwanghae where he oversaw several construction projects in and around the provincial capital Sariwo’n.  In 2010 he supervised the rezoning of three administrative divisions whereby   three countries and one city district (kuyo’k) were transferred from Pyongyang to North Hwanghae Province. 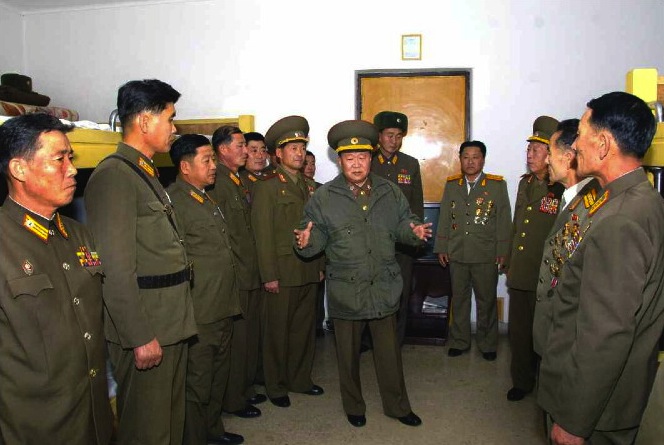 On September 28, 2010, Ch’oe was given the rank KPA General (taejang) in a military promotions order issued to commemorate the 65th anniversary of the Korean Workers’ Party.  At the 3rd Party Conference later the same day, he became a member of the KWP Secretary for Military Affairs and was elected an alternate (candidate) member of the KWP Political Bureau and member of the Central Military Commission.  In this position Choe undertook a number of ceremonial functions including presiding over meetings of workers’ organizations, loyalty oath rallies and central report meetings.

In April 2012 Choe was promoted to Vice Marshal.  During the 4th Party Conference on April 11, 2012 Choe was elected to membership on the Political Bureau Presidium and Vice Chairman of the Party Central Military Commission.  After the 4th Party Conference, DPRK media publicized that Choe had been appointed director of the KPA General Political Bureau, a position vacated by the November 2010 death of Jo Myong Rok (Cho Myo’ng-rok).  At the 5th session of the 12th SPA, Choe was elected a member of the National Defense Commission.

From 2012 to 2014 Choe was a top member of the DPRK leadership.  He led a number of construction projects built by KPA personnel.  He also conducted a number of reported and unpublicized on-site inspections at KPA units and construction sites.  He led a KPA delegation on a May 2013 visit to China where he met PRC President Xi Jinping.  Choe made the trip to explain the DPRK’s fourth nuclear test conducted in February 2013.

After the purge and execution of Jang Song Taek in December 2013, Choe Ryong Hae was widely believed to have replaced Jang as the DPRK’s unofficial #2 man in the hierarchy.  However in mid-February 2014, Choe was interrogated by the Ministry of State Security and his office at the Ministry of the People’s Armed Forces searched.  Amid rumors that he had been removed from office, he reappeared three weeks after these incidents at a field inspection by Kim Jong Un of a KPA Air Force unit.  On April 9, 2014, Choe was elected Vice Chairman of the National Defense Commission.  Nearly three weeks later he was removed from office as Director of the KPA General Political Department, on April 26.  Choe subsequently appeared at a ceremony opening a renovated children’s camp in Kangwo’n Province, identified as a KWP Secretary.

Choe remained a close aide to Kim Jong Un and holds a top position in the DPRK political culture’s formal hierarchy as a member of the KWP Political Bureau Presidium.  In September 2014 at the second session (plenum) of the 13th Supreme People’s Assembly, Choe was removed from office as NDC Vice Chairman to reflect his new responsibilities.  On September 24, Choe was appointed Chairman of the State Physical Culture and Sports Commission and later was part of  a three-man delegation that traveled to Incheon, ROK, for the 17th Asian Games.

In October 2015 Choe Ryong Hae was suspended from his positions in the central party.  According to DPRK and ROK sources he was assigned for re-education first to the Kim Il Sung Higher Party School in east Pyongyang, then to a cooperative farm.  Choe was restored in December 2015.

Choe Ryong Hae was born in Sincho’n County, North Hwanghae Province in 1950.  He is the son of Choe Hyo’n (1909-1982) who served as Minister of People’s Armed Forces and NDC Vice Chairman in the 1970s and was a member (with Kim Il Sung) in the 88th Brigade in the late 1930s.  Choe grew up as a member of an elite DPRK family and was a childhood playmate of Kim Il Sung’s eldest daughter and core elite Kim Kyong Hui, who has served as Choe’s main patron in regime politics.  He attended Mangyo’ngdae Revolutionary School and Kim Il Sung University.  Choe is married to Kng Kyong Sil, a former dancer who was a member of the exclusive Mansudae Art Troupe.  His wife had close personal ties to Kim Jong Un’s mother Ko Yong Hui (1953-2004), formed when both were members of the Mansuade Art Troupe.  Choe has two sons and a daughter.  According to ROK media, citing intelligence sources in China, Choe’s second son (who works in Office #39) is married to Kim Jong Un’s younger sister, Kim Yo Jong.

1981: Elected a Vice Chairman of the KISYL

Elected Deputy and Presidium Member of the 8th SPA

Appointed, 1st Secretary of the KISYL

1998: Removed as 1st Secretary of the KISYL Central Committee