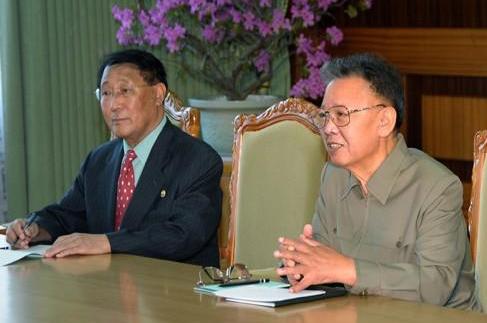 Kang Sok Ju is Secretary and Director of the Korean Workers’ Party [KWP] International Affairs Department.  He is one of the DPRK’s most experienced and influential foreign policy officials, having been one of Kim Jong Il’s trusted foreign policy hands.   He participated in numerous interactions, both in support of KJI and as a delegation leader, with the foreign leadership of the US, Japan, ROK, China and Russia.  Kang is a cousin of Kim Jong Il’s, and served for three decades as a deputy to Kim Yong Nam.

Kang Sok Ju was born in 1939 in South Pyongan.  He is a maternal cousin to Kim Il Sung and Kim Jong Il, being related to KIS mother, Kang Pang Sok.  His older brother was Kang Sok Sung, a former director of the Party History Institute.  Kang attended the University of Foreign Languages.

Kang began his career as a cadre at the CC KWP International Department around 1972.  At the International Department he worked under then-director Kim Yong Nam.  He would later work with Kim Kyong Hui when she was the department’s deputy director in the late 1970s.  In 1981 Kang was assigned as a diplomatic secretary at the DPRK’s UNSECO Mission in Paris.  He was appointed a Vice Minister of Foreign Affairs in 1984.

In 1986, Kang Sok Ju was appointed Senior Vice Minister of Foreign Affairs and elected a deputy to the Supreme People’s Assembly.  Kang was elected to candidate membership on the Party Central Committee (CC KWP) in 1988 and elected to full membership at the 19th plenum (6th Term/6th CC) in December 1991.  Kang delivered the DPRK’s acceptance speech on the country’s admission, along with the ROK, to the UN.  In the early 1990s Kang took on a central role in the DPRK’s negotiations and interactions with the US, including serving as its chief nuclear negotiator.

In 2007 Kang was appointed a councilor of the National Defense Commission, a concurrent position.  Kang accompanied Kim Jong Il to China in May and August of 2010.  On September 23, 2010, Kang Sok Ju was appointed DPRK Vice Premier and on 25 September he was identified as 1st Vice President of the DPRK Supreme Court.  On April 8, 2014 Kang was appointed KWP Secretary and Director of the International Affairs Department.