Asahi Shimbun reported on 21 November (Wednesday) that satellites caught sight of a shipment of missile parts traveling from Pyongyang factories  to the country’s Sohae Satellite Launching Station in Tongch’ang-dong, North P’yo’ngan Province.  Asahi reported that missile parts were delivered from Sanum-dong, Ryongso’ng District in northwest Pyongyang to the Sohae facility in Ch’o’lsan County.  According to Asahi “Satellite photos of the cargo showed similarities to the long-range ballistic missile that North Korea launched in April.”  Yonhap News Agency quoted an unnamed intelligence official who said, “It is certain that those are missile parts.”  Hankyoreh quoted a ROK military official who said that the satellite imagery showed “peculiar activity” and said that the shipment was “not for ordinary missile base activity like maintenance or repairs.” 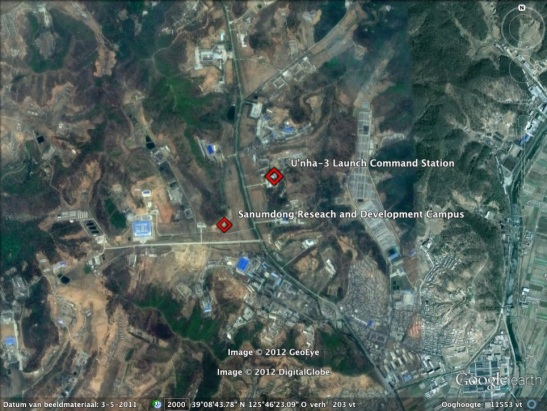 An overview of the Sanum-dong Research and Development Complex in northwest Pyongyang (Photo: Google image) 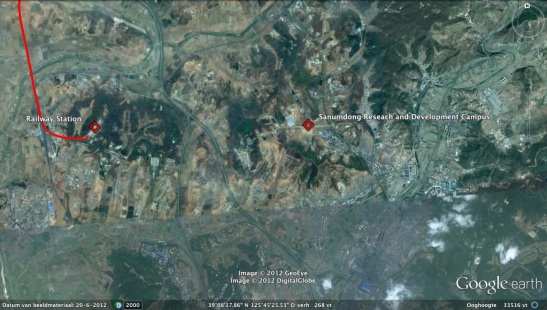 Overview of the Sanum-dong Research and Development Complex and a specialized railway station in northwest Pyongyang (Photo: Google image)

The shipment of missile parts follows ongoing construction activity on the Sohae Satellite Launch Station’s service structures and testing of rocket engines between April and September 2012.  According to a widely-reported image analysis by Nick Hansen for 38 North , “Imagery from September 28 shows that, while the lower three sets of platforms remain closed, the top set is retracted back against the gantry. A payload support arm, first photographed by the media on April 8, 2012 is visible. Since a lower arm was used for the Unha-3 vehicle, this arm is intended to support a much taller rocket planned for future launches from Sohae. The gantry crane was aligned over the open platforms, indicating that work was being done” and that “Pyongyang appears to have conducted at least one and possibly more large rocket engine tests at Sohae between April 13 and September 17 this year. . .Imagery from September 28 indicates that another rocket engine test has recently been conducted.”

It is not entirely certain when, or if, the DPRK plans to conduct a satellite launch or long-range missile test.  The DPRK leadership is well aware that its activities are monitored through satellites and heavily scrutinized in Seoul, Tokyo and elsewhere.  As Asahi reported “because Pyongyang is aware of the orbit of U.S. spy satellites, it might have moved the cargo to use as a bargaining chip.”  A ROK Minister of National Defense, quoted in Hankyoreh, said “‘We’re going to have to wait and see if they actually go ahead with the launch,’ the official said, adding that it would a tall order technically because it typically takes over a year to find and fix the sort of flaw that would have caused the launch failure in April.”  The Sohae shipment might be a matter of keeping external observers guessing, as well as keeping the DPRK missile program’s employees and middle managers busy.  Given how quickly the U’nha-3 crashed after its 13 April 2012 launch, the core leadership in Pyongyang may also be sating its constituency in the Korean Workers’ Party Second Economy Commission.