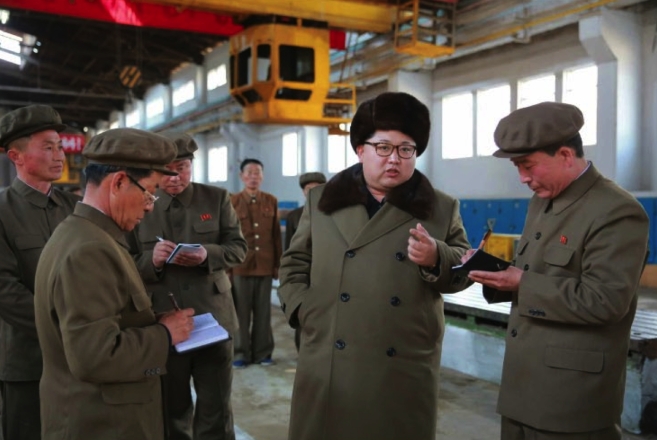 DPRK state media reported on March 24 (Thursday) that Kim Jong Un (Kim Cho’ng-u’n) visited the February 11 of the Ryongso’ng Machine Complex and observed and supervised the test of a rocket engine and cascade separation. 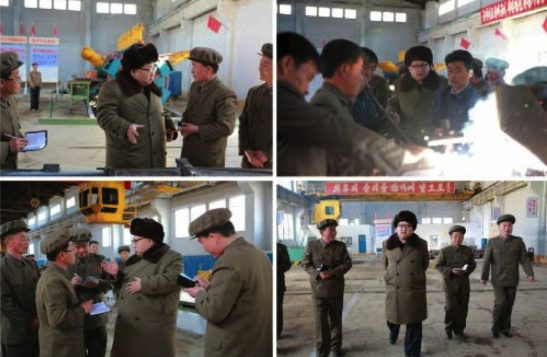 He first toured an exhibition of the plant’s revolutionary history and remarked that the “plant splendidly arranged the room for the education in the revolutionary history which houses with due respect photos of President Kim Il Sung (Kim Il-so’ng) and leader Kim Jong Il (Kim Cho’ng-il) on the principle of visual effect and displayed well historic data and relics.”  He noted that “the history of the plant represents the one of the leadership of the President and Kim Jong Il” and stressed “the need for its workers to boost the production of modern heavy machines and equipment urgently required by various fields of the national economy through the meticulous organization of the education in their leadership exploits and thus thoroughly implement their behests.”

Kim Jong Un was briefed about the February 11 Plant’s machines about which he had issued instructions when he visited the plant during 2015.  He was “greatly pleased to see ultra-modern machine products standing in rows” and said it was “spectacular scenery.”  He praised “the plant” and noted that it “deserves the title of her as it unconditionally carried out any task set forth by the WPK.”  Jong Un toured the metal processing, casting, assembly and other shops in the plant and was briefed about manufacturing.  He said that the “plant has a very important role to perform in developing the machine-building industry and building a thriving nation” and he issued instructions and tasks related to the plant’s production and management, underlining “the need to update the plant to meet the requirements of the age of knowledge-based economy and a highly-civilized socialist nation in order to sharply increase its production capacity and further improve the quality of products.”  He also issued “precious instruction for carrying out those tasks.” 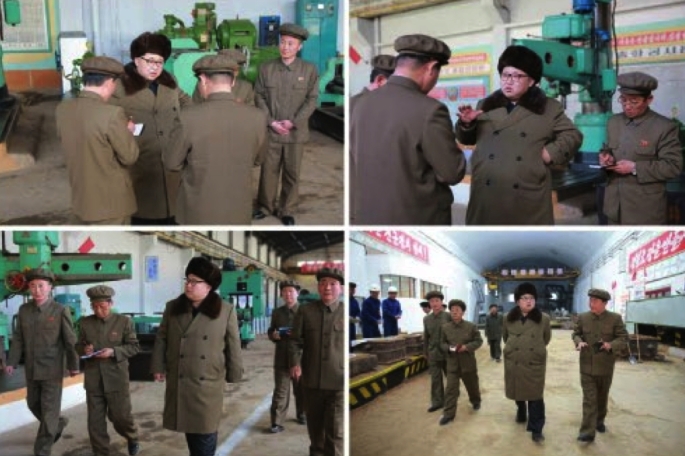 Jong Un “underscored the need to successfully build a sci-tech dissemination center and manage it effectively to help the officials and employees of the plant acquire modern science and technology as to increase in production and the improvement of quality of products are guaranteed by science and technology” and he called “for directing great efforts to training them as intellectuals by putting them under the study-while-working education system.”  He said that “the party itself would take charge of building the sci-tech dissemination center and cultural center of the plant and complete the projects within this year.”  He also expressed “great expectation and belief that the workers would give face-lifting to the plant to meet the requirements of the age of knowledge-based economy and a highly civilized socialist nation and bring about a fresh upsurge in the development and production of modern machines.” 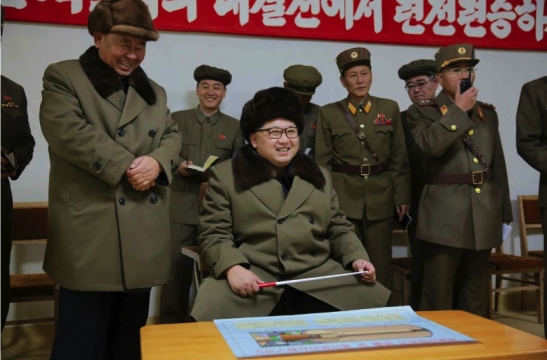 Kim Jong Un’s next stop was attending and supervising the testing of a solid fuel rocket engine and cascade separation which was “aimed to examine the structural safety of the rocket engine newly designed and manufactured by the Korean style and its thrust and estimate the working specifications of heat separation system and other system.”  Attending the test was Ri Pyong Chol (senior deputy director of the WPK Organization Guidance Department) and Hong Yong Chil (deputy director of the WPK Military Industry [machine-building] Department).

Detail of a diagram placed on a table in front of Kim Jong Un for the engine and cascade separation test (Photo: cropped and level equalization by NK Leadership Watch based on an image published by Rodong Sinmun).

Before the test commenced, Jong touched the rocket engine and said “with confidence” that the test “would prove successful as it was manufactured by defense scientists and technicians of the DPRK, a product of self-reliance and self-development.”  He instructed the test to begin and the “engine spewed out huge flames with deafening boom.”  According to KCNA, the results “of the test proved that the values of estimation conformed to those of measurement to an amazing extent and they are in full line with scientific and technological indices.”  Kim Jong Un expressed “great pleasure and satisfaction” and clapped “his hands congratulation [test personnel] on their success.” 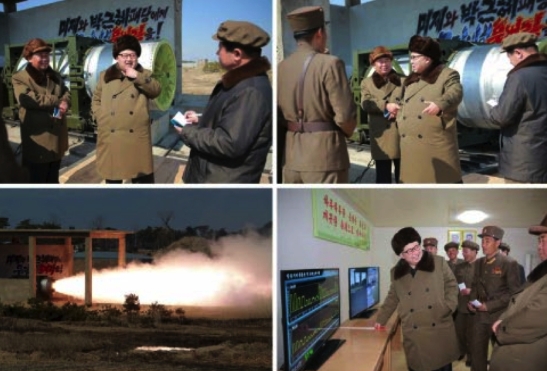 Jong Un noted “with great pleasure that the successful test provided a firm guarantee for attaining the high goals of national defense science and technology without fail this year when the Seventh Congress of the WPK would be held and helped boost the power of ballistic rockets capable of mercilessly striking hostile forces.” He remarked that the “successful test of the jet and cascade separation of the above-said rocket engine which is of historical and strategic important by dint of self-reliance and self-development makes it possible to remarkably bolster the military capability of the invincible Paektusan (Mt. Paektu) army” and he stressed “the feats the national defense scientists and technicians of the DPRK performed by working hard to increase the national defense capability would always go down in the history of the country.” 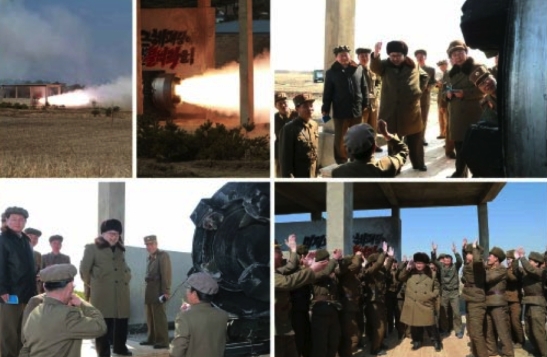 Kim Jong Un held a commemorative photo-op with the personnel involved in the test and he expressed “expectation and belief that the scientists and technicians in the field of national defense science would achieve successes one after another to instill conviction and optimism into the service personnel and people of the DPRK and, at the same time, strike great horror and terror into the hearts of the enemies, bearing in mind the heavy yet honorable duties they have assumed before the times, the revolution, the country and its people.”