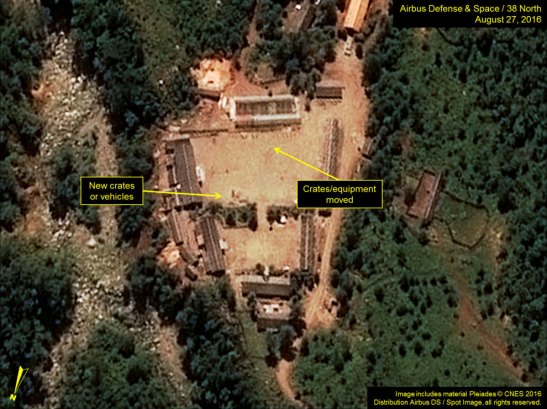 The DPRK conducted its fifth nuclear weapons test at the P’unggye-ri Test Site at 9 AM PYT on September 9, 2016 (Friday).  This caused  a 5.3 magnitude earthquake at Su’ngjipaekam, Paekam [Paegam] County, Yanggang Province to register on USGS monitoring system.

Scientists and technicians of the DPRK carried out a nuclear explosion test for the judgment of the power of a nuclear warhead newly studied and manufactured by them at the northern nuclear test ground under the plan of the Workers’ Party of Korea (WPK) for building strategic nuclear force.

The Central Committee of the WPK sent warm congratulations to nuclear scientists and technicians of the northern nuclear test ground on the successful nuclear warhead explosion test.

The nuclear test finally examined and confirmed the structure and specific features of movement of nuclear warhead that has been standardized to be able to be mounted on strategic ballistic rockets of the Hwasong artillery pieces units of the Strategic Force of the Korean People’s Army as well as its performance and power.

It was confirmed through the results of analysis of the test that the measured values including explosion might and the nuclear material use coefficient conformed with the calculated values and that there was no radioactive materials leakage during the test and, therefore, no adverse impact on the ecological environment of the surroundings.

The standardization of the nuclear warhead will enable the DPRK to produce at will and as many as it wants a variety of smaller, lighter and diversified nuclear warheads of higher strike power with a firm hold on the technology for producing and using various fissile materials. This has definitely put on a higher level the DPRK’s technology of mounting nuclear warheads on ballistic rockets.

The nuclear warhead explosion test is a demonstration of the toughest will of the WPK and the Korean people to get themselves always ready to retaliate against the enemies if they make provocation as it is part of practical countermeasures to the racket of threat and sanctions against the DPRK kicked up by the U.S.-led hostile forces who have gone desperate in their moves to find fault with the sovereign state’s exercise of the right to self-defence while categorically denying the DPRK’s strategic position as a full-fledged nuclear weapons state.

We will take further measures to bolster the state nuclear force in quality and quantity for safeguarding the dignity and the right to existence of the DPRK and genuine peace from the U.S. increasing threat of a nuclear war.