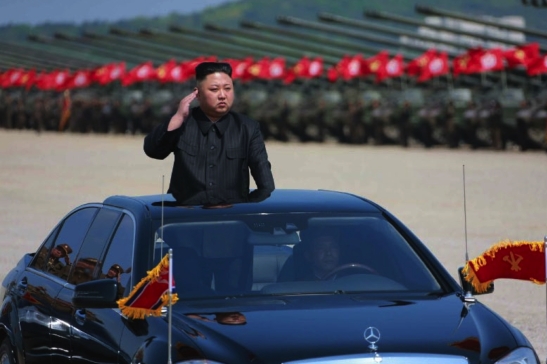 Kim Jong Un and members of the high command review participants in a live fire exercise on April 25, 2017 in Wo’nsan to mark the official 85th anniversary of the foundation of North Korea’s armed forces (Photos: KCNA/Rodong Sinmun).

After exchanging pleasantries with members of the KPA high command and receiving a salute from Col. Gen. Pak Jong Chon, Jong U then reviewed a parade of KPA Navy, KPA Air and Anti-Air Force and KPA Artillery Force who would participate in the live fire exercise.  He was briefed about the exercise and ordered it to commence. 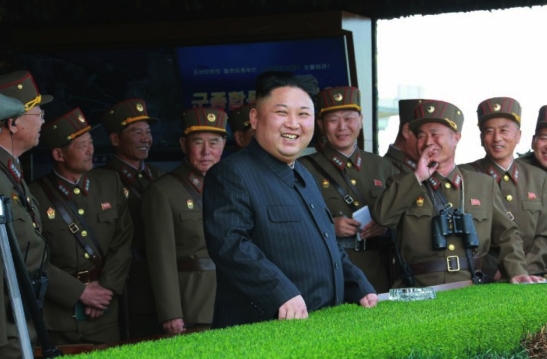 According to KCNA “submarines rapidly submerged to make torpedo-attacks at the ‘enemy’ warships while fighters and bombers made zero feet flight above the sea to drop bombs on the targets.”  Jong Un praised “the seaman of submarines and pilots for hitting their targets each time.”  More than 300 artillery pieces “lined up along the coast opened fire all at once” and Jong Un remarked that “the brave artillerymen mercilessly and satisfactorily hit the targets and the gunshots were very correct…they showed well the volley of gunfire of our a match-for-a-hundred artillery forces giving merciless punishment to the hostile forces.”

Kim Jong Un said that “the largest-ever combined fire demonstration of the KPA services in celebration of its 85th founding anniversary was the humblest reverence for President Kim Il Sung (Kim Il-so’ng) and leader Kim Jong Il (Kim Cho’ng-il), founder and builder of the revolutionary armed forces, and the infinite glory of the powerful revolutionary Mt. Paektu army” and he expressed “great satisfaction over the successful demonstration and highly praised the feats of the service personnel who took part in the exercise.”  Jong Un said that “the revolutionary armed forces, which started with two pistols and covered 85-year-long way of victory have been developed into the matchless strong army equipped with the latest attack means and they are fully displaying the might of the revolutionary Party’s army at the forefront in defense of the country and building of a prosperous country.”  He “warmly congratulated all the service personnel of the KPA on its founding anniversary” and stressed that “as long as there is heroic Korean People’s Army, boundlessly faithful to the Party [then] the socialist motherland is impregnable and a new morning of the final victory will break.”