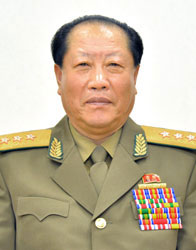 Choe Pu Il attended Kim Il-song Military University.  He was commissioned into the KPA Naval Command (Korean People’s Navy) and spent the early portion of his career in the Korean People’s Army’s (KPA) Sports and Physical Culture Guidance Committee where, among other positions, he managed the 25 April Sports Group.  In this position he routinely interacted with the central leadership, including Kim Jong Il.

Choe Pu Il was promoted to Lieutenant General on 8 October 1995.  He has held positions as a brigade commander, chief of staff in an army corps and a corps commander.  A former basketball player, Choe was said to have formed an elite DPRK team that practiced and played with Kim Jong Il’s sons, Kim Jong Chol and Kim Jong Un

Choe was promoted to Colonel General in July 2006.  He was reported to have attended a reception at the PRC Embassy with KCI in March 2007 and KCI’s inspection of a KPA unit in November, 2007.  Choe was appointed Vice Chief of the KPA General Staff in February 2009.

Choe was promoted to General several hours ahead of the 3rd Party Conference and CC KWP September 2010 Plenary Meeting.  At these meetings, Choe was elected to full membership on the CC KWP and membership on the CMC.  On 10 October 2010 Choe led the military parade held to celebrate the 65th anniversary of the foundation of the Korean Workers’ Party.  Gen. Choe served briefly as Chief of the KPA General Staff Operations Bureau and ex aequo 1st Chief of the KPA General Staff.  During 2012 he was reduced to Colonel-General (three star).

According to DPRK state media, Choe Pu Il was born in March 1944 and joined the military September 1961.