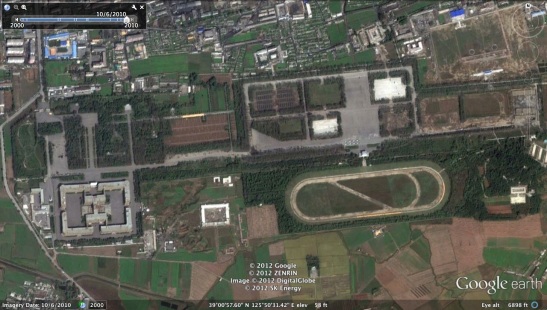 The Korean People’s Army [KPA] has begun gathering pieces of military equipment and personnel at Mirim Airport in east Pyongyang, in preparation for a large military parade or demonstration.  Tanks, armored vehicles and various munitions started arriving at the airport in December.  It is also believed that  factory showroom models of the KN-02 and other missiles will be towed during the parade.  Another indication of parade preparations might also be found in Kim Jong Un’s recent activities.  Jong Un, Jang Song Taek and other members of the central leadership were recently reported to have observed a parachute demonstration and air show, as well as a concert by the “Military Band of the KPA.”

While certain to take place on a national holiday, it is not clear (and there are conflicting reports) whether the parade will happen around the anniversary of Kim Jong Il’s official 70th birthday on 16 February 2012, or for the centennial celebrations of Kim Il Sung’s birthday on 15 April 2012.  For the 10 October 2010 military parade held to celebrate the 65th anniversary of the Korean Workers’ Party, the KPA began rehearsals and mobilized personnel and equipment to Mirim Airport in July, or three months before the parade was held.

“We’ve recently detected that North Korean soldiers are preparing for a large-scale military parade by mobilizing a massive number of troops, including reserve forces at Mirim Airport near Pyongyang,” the source said. “We assume that they will stage a military march on the birthday of Kim Jong-il.”

“We were informed that North Korea brought its newest battle tank Pokpung, armored vehicles, anti-aircraft guns and missiles [to the exercise venue],” the source added. “If that weaponry appears at the upcoming march, it will become its largest parade ever.”

Although North Korea conducts goose-stepping soldiers’ marches to mark major national holidays such as the birthday of founder Kim Il Sung, the anniversary of the army and the Workers’ Party, this is the first time a military parade would be held on Kim Jong-il’s birthday.

Sources said that North Korea is developing a new ground-to-ground missile, KN-06, and other ballistic missiles. It may unveil new weapons at the parade to fulfill its oft-stated promise that 2012 will mark the year of “strong and prosperous nation.” At the parade to mark the 65th anniversary of the Workers’ Party in 2010, the North showed off its Musudan intermediate-range ballistic missile, which has a reported range of 2,500 to 3,000 kilometers (1500 to 1864 miles).

In an image taken on 6 October 2010, tanks, vehicles and other pieces are gathered at Mirim Airport, four days ahead of a military parade held to commemorate the party's 65th anniversary (Photo: Google image)