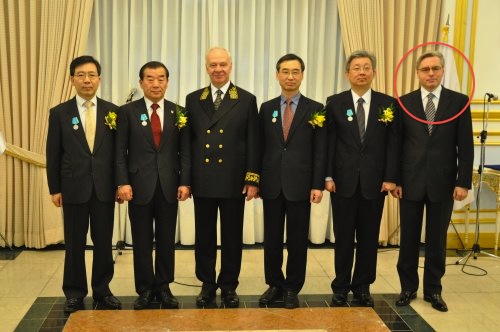 The Russian Federation has appointed a new Ambassador to the DPRK.  Alexandr Timonin has worked in the Russian Foreign Ministry’s Asia Department, served as an at-large ambassador and was an interim manager of Russia’s embassy in Pyongyang.  Timonin also gave an interview to Kommersant in 2011 on plans to construct an oil pipeline running through the DPRK into South Korea, which he said reached a “milestone” after outgoing Russian President Dmitry Medvedev met with Kim Jong Il in Ulan Ude in August 2011.  Timonin replaces Valery Sukhinin, who was appointed in 2007.  Sukhinin accompanied Kim Jong Il on his trip to Russia’s Far East in 2011.  He also attended a March 2012 concert by the U’nhasu Orchestra at which he danced with one of the performers and was greeted by Kim Jong Un (Kim Cho’ng-u’n).  In April, Sukhinin made a farewell tour around Pyongyang, meeting with DPRK Foreign Minister Pak Ui Chun, Supreme People’s Assembly Presidium President Kim Yong Nam and receiving the DPRK Order of Friendship.

On 3 May (Thursday), Timonin presented his credentials to Kim Yong Nam.  KCNA reports:

Kim Yong Nam, president of the Presidium of the Supreme People’s Assembly of the DPRK, received credentials from Alexandr Timonin, Russian ambassador to DPRK, at the Mansudae Assembly Hall on May 3.

Kim had a talk with him after receiving the credentials.

One comment on “New Russian Ambassador to DPRK Presents Credentials”