Kim Jong Un’s first visit was to the statue of his father, late supreme leader Kim Jong Il, on the campus of the Ministry of State Security (a.k.a. KPA Unit #10215).   Minister of State Security Gen. Kim Won Hong and Director of the MSS Political Bureau Col. Gen. Kim Chang Sop greeted KJU   After paying tribute to the statue, KCNA reported that Kim Jong Un “watched the statue of smiling Kim Jong Il for a long while, the statue of the leader imposingly standing in a padded dress telling every event of the Songun revolution, one of his hands placed on his waist. He looks as if he were powerfully encouraging all servicepersons and people in the struggle to win a final victory, wishing the great Paektusan nation a rosy future.”    After talking about the statue’s resemblance to KJI, Kim Jong Un spoke to State Security’s senior officials.

According to KCNA KJU said, “The Ministry of State Security has a very important duty to perform to protect the sovereignty of the country and the nation.  The security men should wage a fierce struggle against the enemies on the invisible front as they did always.  The security men should make a revolution, remaining loyal to the party to the last in any storm and stress.”  KCNA also reported that Kim Jong Un “underscored the need to intensify the struggle to decisively foil the ideological and cultural poisoning and psychological warfare of the enemies, while following their moves with vigilance, and make sustained energetic endeavors to put the work for state security on an ultra-modern and IT basis.” 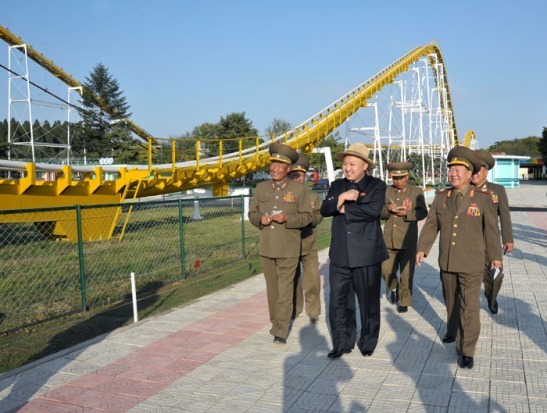 Kim Jong Un then visited the ongoing renovations of the Mangyo’ndae and Taeso’ngsan fun fairs.  According to KCNA the renovation work was conducted by KPA Large Combined Units (tayonhap pudae) #526 (KPA General Staff) and #966 (Pyongyang Defense Command)**.  At the Mangyo’ndae Fun Fair KJU visited a laser tag arena, a water park, a beach volleyball area, and a roller coaster.  KCNA reported that he “was very pleased to tour the funfair, adding service personnel of the KPA powerfully demonstrated the might as a revolutionary army by renovating the funfair as required by the era of military-first (so’ngun).”

Kim Jong Un also visited the Taeso’ngsan Fun Fair in east Pyongyang where he said, “As I had appreciated while looking round the Mangyongdae Funfair, service personnel of the KPA are demonstrating their might as a powerful revolutionary army which carries out whatever regarded as impossible in major worksites for building an economic power and improving the people’s living standard.”  He toured the Nammun restaurant and its dining room, a ferris (big) wheels and several other rides.  According to KCNA KJU “expressed expectation and conviction that the service personnel of the combined large units which participated in the renovation of the funfairs would do more things for the people in the future and thus fulfill their mission as the People’s Army.”

**Both of these units had ties to the former KPA Chief of the General Staff, VMar Ri Yong Ho