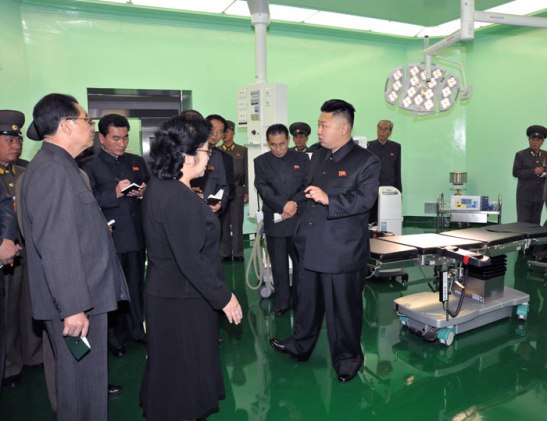 Kim Jong Un talks to his aides during a tour of the Breast Cancer Research Center at Pyongyang Maternity Hospital (Photo: Rodong Sinmun) 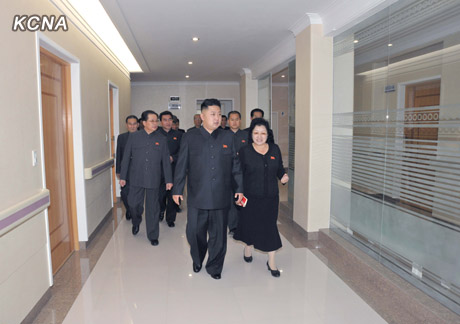 Kim Jong Un’s first visit was to the recently-completed Breast Cancer Research Center at Pyongyang Maternity Hospital in east Pyongyang.  KJU toured the research center’s radiological and examination units.  According to KCNA, KJU “was satisfied to hear officials of the hospital say they learnt a lot from the work style of the soldier-builders” and “was pleased to hear from officials in the field concerned say that the hospital could provide medical service to women not only of Pyongyang City but also all other parts of the country through tele-healthcare system.”  Kim Jong Un said that “it was important to prevent mastopathy and breast cancer, find out and treat them at an early stage through regular examination of women now that the hospital has such cutting-edge equipment.” 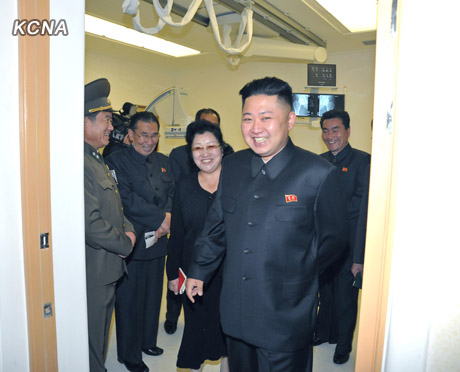 KCNA reported that KJU “recollected that leader Kim Jong Il gave an earnest instruction on building a modern breast cancer research centre at the Pyongyang Maternity Hospital in November last year, the last days of his life, and personally examined its blueprint. He told officials of the center to successfully manage and operate it associated with the profound loving care of Kim Jong Il.”  Kim Jong Un also toured surgical units and patient rooms where he inspected scrubs, patient gowns and footwear.  According to KCNA KJU “extended thanks to the soldier-builders who took part in the construction of the centre, expressing great satisfaction over its construction.”  He said the hospital “looked impeccable in any aspect and women would be pleased to visit it.”  KJU also “told the officials of the hospital to creditably fulfill their mission and duty as faithful servants of the people, always bearing in mind the emotion-charged autograph sent by Kim Jong Il to it on February 3, 1993, hoping them to serve the people.” 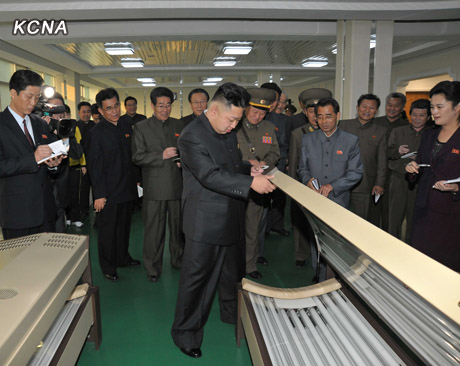 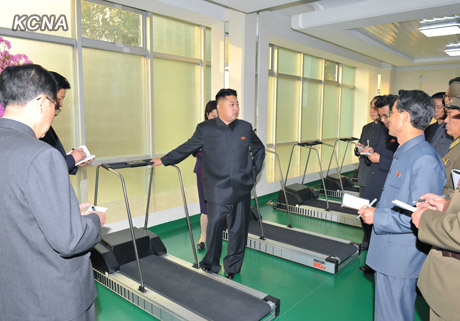 Kim Jong Un then visited the final phase of the construction of the Ryugyong Health Complex.  Upon arriving at the complex, KJU “waspleased to see a large lobby decorated with beautiful flowers and fitted with peculiar round benches so the visitors may have pleasant rest,” but also “called for rebuilding the floor better with quality wood.”  He toured an occupational therapy unit, a public bath and sauna.  During his stop at the sauna he said “it is necessary to ensure appropriate temperature and, at the same time, adjust it in such a way as to make it emit steam evenly” and “called for properly distributing divans and fully ensuring sanitary environment in the stalactite and pine tree saunas.”  According to KCNA Kim Jong Un “called for meticulously organizing service at the complex and its operation, noting that when it would be opened, people would like to visit it and would greatly benefit from it in winter.”  He also said he “was greatly pleased to visit the complex” and “told the officials to hold its opening ceremony so that the people may lead a happy life as creators and enjoyers of socialist culture.”

Kim Jong Un’s next visit was to the People’s Open-Air Ice Rink.  According to KCNA KJU said “that as the ice rink is based on cutting-edge technology, there would be unfolded such spectacular scenery in which working people and school youth and children skate in shirts in mid summer” and that “ice rink should be available for ordinary working people under any circumstances.”  After watching the skaters, he ended his visit with commemorative photo-op with young children who used the ice rink. 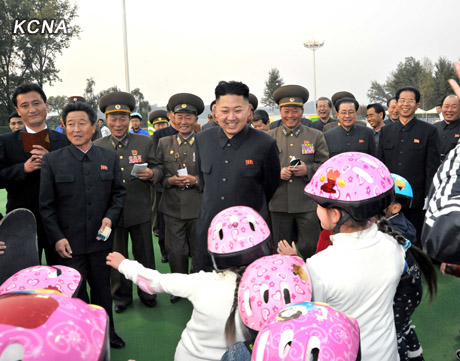 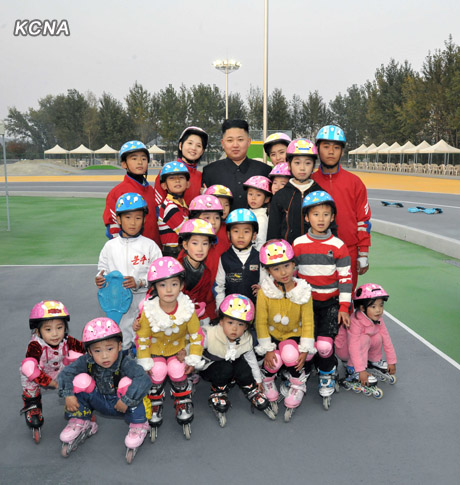 Kim Jong Un poses for a commemorative photograph with rollersbladers at a recently completed skate park in Pyongyang (Photo: KCNA)

Kim Jong Un poses for a commemorative photograph with rollerbladers and employees of a skate park in Pyongyang (Photo: KCNA)

KJU’s final visit was to a skate park.  KCNA reported that he “learned in detail about the perimeter of the main track and operation of the ground, saying many people would visit it as it is located in a good place” and that “repeatedly expressed satisfaction over the construction of the ground, saying he liked it.”  After thanking Korean People’s Army [KPA] units who contributed to the skate park’s construction, Kim Jong Un remarked, “in order to develop sports, it is necessary to steadily seek means and methods suited to the actual conditions of the country on the basis of thorough preparations and develop sports science and put it on a high level, underscoring the need to take measures for the supply of physical exercise apparatuses.”  He ended his visit to the skate park by having commemorative photographs taken with Pyongyang citizens and their children at the park.