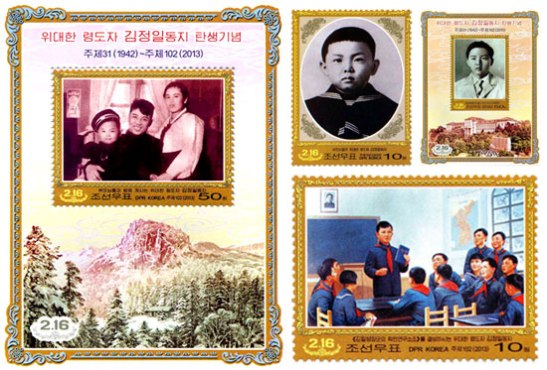 On 7 February the DPRK’s State Stamp Bureau issued commemorative stamps to mark Kim Jong Il’s birth anniversary. According to Rodong Sinmun “the stamps show how Kim Jong Il cultivated his qualification and traits as leader to carry forward the revolutionary cause of President Kim Il Sung after his birth as the son of Mt. Paektu.” (Photo: Rodong Sinmun)

DPRK state media reported during 7-9 February (Thursday-Saturday) that events commemorating the official 71st birthday of late leader Kim Jong Il, called the Day of the Shining Star, began in and around Pyongyang.  On 7 February (Thursday), a 10-day nationwide film festival that will screen official documentary and feature films in Pyongyang and in the provinces.  According to KCNA “all of them deal with the glorious revolutionary history of Kim Jong Il and his undying feats” and the films will include Under the Guidance of the Great Brilliant Commander, The Great Leadership for Pushing Back the Frontiers of Science and Technology, Shining Star Above Mt. Paektu, Legacy, White Gem, Wish and Comrade Kim Goes Flying.  Ceremonies which opened the film festival were held in Pyongyang and provincial capital cities.  The Pyongyang ceremony occurred at the People’s Palace of Culture on 7 February.  It was attended by Korean Workers’ Party [KWP] Secretary and Director of the KWP Propaganda and Agitation [publicity and information] Department Kim Ki Nam, along with ” officials concerned, creators and artistes in the field of movie art and Pyongyangites.” 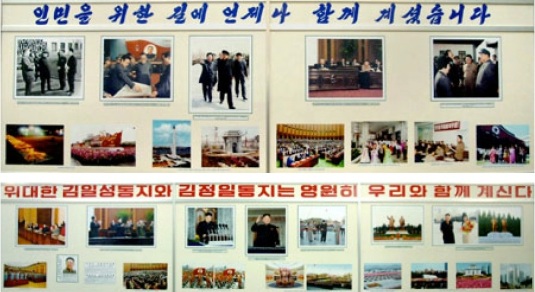 On 8 February (Friday) a photo exhibition titled “They Were Always Together to Bring about the People’s Well-being” showing photographs of the country’s later founder and president, Kim Il Sung, Kim Jong Il and Kim Jong Un and “dealing with the feats the great Generalissimos who led all the Koreans to the road of independence and the great national unity and energetically worked for global peace and stability, friendship and solidarity among the peoples under the uplifted banner of independence against imperialism.”  KWP Secretary Kim Ki Nam and Supreme People’s Assembly [SPA] Presidium Vice President Yang Hyong Sop along with “officials concerned and people in the city” attended the opening ceremony.

Also, on 8 February (Friday) recipients of the Kim Jong Il Prize and Order of Kim Jong Il, based on 6 February 2013 decrees of the SPA Presidium, were publicized. The KJI Prize was presented to  Kim Sang Ok for “a great contribution to the development of the nation’s science and technology by displaying intense loyalty to the party and the leader and devoting creative wisdom and enthusiasm” and the Kwangmyo’ng Encyclopedia because it “helps officials and people raise the levels of political theories and cultural knowledge as required by the building of a thriving socialist nation and the age of knowledge-based economy.”

The Order of Kim Jong Il was given to “units and officials, service persons and people made great contributions to bolstering up the national defense capabilities and building an economic giant through a dynamic drive for consolidating the political and ideological position of the Korean revolution as firm as a rock and devotedly carrying out the lines and policies of the Workers’ Party of Korea by rallying the broad masses close around the Party, true to the Military-First (So’ngun) revolutionary leadership of the Party.”  Institutions receiving the Order of KJI were the Rakwo’n Machine Complex, the 5 March Youth Mine in Chagang Province, Kanggye U’nha Garment Factory and Migok Cooperative Farm.  Among the individuals receiving the Order of KJI were Paek Kye Ryong (Chief Secretary of the Kangwo’n Provincial KWP Committee) and O Su Yong (Chief Secretary of the North Hamgyo’ng Provincial KWP Committee) along with several third-generation officials from the KWP, DPRK Government and KPA: Kim Chang Myong; Ro Kyong Jun; Choe Tae Il; Pak Cho Yong; Ryom Chi Gwon; Kang Kil Yong; Mi Chang Guk; Yun Ho Nam; U Tok Su; and. Ryom U Jun.

On 8 February (Friday) DPRK state media reported on the end of cooking contest held during 6-8 February.  According to KCNA “competition was divided into the fields of public service and service of ministries and national institutions, hotels and provincial public catering and service. Present there were cooks and waitresses of 32 organizations” and “held by such methods of experts and masses’ judgment of preparations for cooking, sanitation, dressing processes and taste.” On 9 February (Saturday) DPRK state media announced that the 22nd Paektusan (Mt. Paektu) Prize International Figure Skating Festival will be held during 15-17 February in Pyongyang to commemorate KJI’s birthday.  According to KCNA the “is an annual event reflecting the unanimous desire and aspiration of the Korean people, world progressives and athletes to celebrate the birth anniversary of Kim Jong Il as the greatest holiday of the nation and holiday common to humankind” and “will bring together foreign and Korean skaters who proved successful in international and national contests. It will involve exhibition ice dances and pair and individual events.”

The events commemorating KJI’s birthday ceased what had been a slow news week in the state media.  Much of the content targeting an external audience consisted on various essays and editorials focused on the country’s response to the passage of United Nations Security Resolution #2087 (2013), such as the possibility of a third nuclear test and what were described as “the firm resolution to take substantial and high-profile important state measures in view of the prevailing situation.”  Content targeting an internal audience focused ongoing development efforts throughout the country, including the renovation of the Victorious Fatherland Liberation (Korean War) War Museum, and study tours of revolutionary historical battle sites by members of the Korean Children’s Union and the Kim Il Sung (Socialist) Youth League.  For a few days, members of the central leadership appeared to have gone to ground, or at least to senior level meetings that were not reported in state media.  On 8 February (Friday) a DPRK media outlet said the a third nuclear test was a matter of “the U.S. and hostile forces jumped to conclusions that the republic is planning the third nuclear test, citing their hypothesis and argument,” that any upcoming activities “are aimed at safeguarding its national interest, not at threatening anyone” and  “it remains to be seen what the important state measures are, though it is clear that any U.S. reactions to them may prove to be only irrevocable losses.”