According to KCNA, the fishery station “is making a big haul” and Jong Un “highly appreciated the officials and employees of the station for having worked hard to make a big haul true to the Supreme Commander’s desire to supply fishes to the servicepersons every day.”  He toured the fishery station’s historical exhibition and saw “with keen interest data on the development of the station inaugurated in 1972, he noted that leader Kim Jong Il (Kim Cho’ng-il) had shown special care for the soldiers of KPA Unit 549 President Kim Il Sung (Kim Il-so’ng) wanted to inspect in his lifetime.”  He remarked that KIS and KJI “would have been very glad to know that the station has made a big haul for the soldiers.” 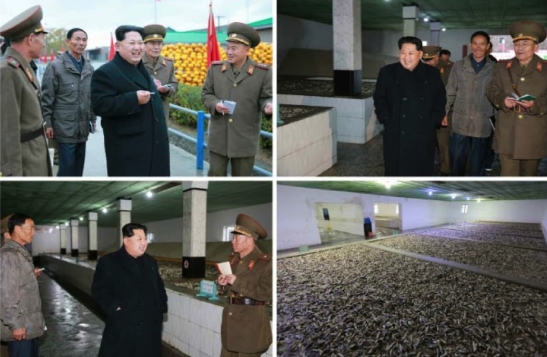 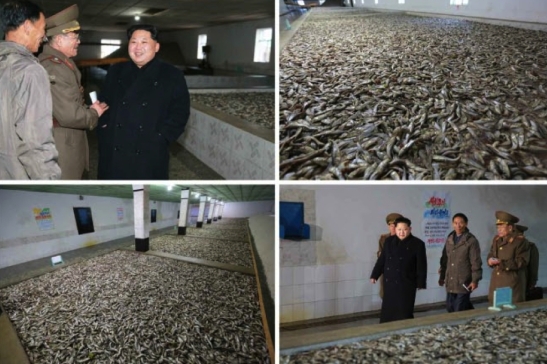 Kim Jong Un toured the fishery station and was briefed about its management and operations.  He said that “it is spectacular to see the pickling tanks and freezing storehouses full of fishes” and expressed “great pleasure over the fact that the station caught thousands of tons of fishes in a few days.”  According to KCNA, Jong Un “called on the station to set a high goal for remarkably increasing the yearly output of fish in a short span of time on the basis of this year’s achievement” and he “stressed the need to arrange enough sharp-freezing and refrigerating facilities for supplying fresh fishes to the soldiers in all seasons and raise the proportion of mechanization in unloading, sorting, freezing and storage works while taking care of fishing boats and economizing in the use of fishing materials.”

Jong Un also said that “the station should be turned into a modern fishery base to go well with shore scenery and to be impeccable even in the distant future.  It is needed to give face-lifting to all production and living buildings and construct breakwater and wharf better. (My) visit to the station is aimed to not only congratulate it on its achievement in fishing but also provide a fresh turning point in the work of the station.  Modernization of the station will help it catch more fishes.  The station should be turned into an up-to-date fishery base which can be boasted of in the world, thus making our ongoing efforts produce good results for the servicepersons and civilians.  The loud whistle fishing boats in the fisheries run by the KPA are sounding in the area of the east sea to herald big hauls serves as a source of giving inspiring strength to the civil fisheries.”

He “expressed belief that the officials and employees of the Fishery Station No. 15 under KPA Unit 549 would renovate the station wonderfully as intended by the Party and greet the 7th WPK Congress with the greater success in fishing as befitting the makers of the history of big fish haul.”