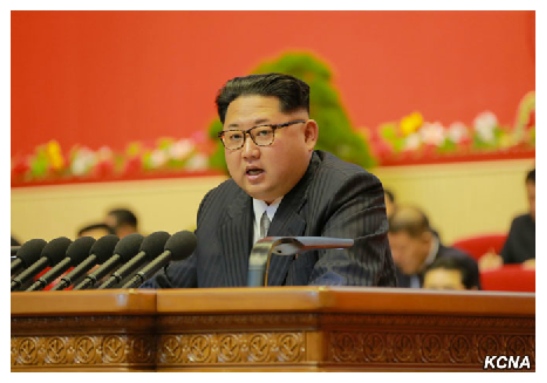 Kim Jong Un delivers the report of the WPK Central Committee during the second day of the 7th Party Congress at April 25 House of Culture in Pyongyang on May 7, 2016 (Photo: KCNA).

Kim Jong Un (Kim Cho’ng-u’n) delivered the mandatory report on the work and activities of Workers’ Party of Korea [WPK] Central Committee during the 7th Party Congress sessions on May 6 (Friday) and May 7 (Saturday).  During the report Kim Jong Un announced a “five-year strategy for the state economic development from 2016 to 2020” which will be the first “Five Year Plan” announced by the DPRK since the 1980s.   According to KCNA, he said:

The period since the 6th Congress of the WPK was the one of the unprecedentedly grim struggle in its long history and years of glorious victory which witnessed great changes.

During the period under review a signal victory has been won in the socialist construction and an eternal foundation for accomplishing the revolutionary cause of Chuch’e has been laid thanks to the great Chuch’e idea, So’ngun (military-first) politics of the WPK and the devoted struggle waged by the army and people of the DPRK intensely loyal to the party.

Under the program of modeling the whole society on the Chuch’e idea set forth at the 6th Congress of the WPK, it has pushed forward the work to model the entire party and the army on the Chuch’e idea and revolutionize, working-classize and intellectualize all members of the society, thereby consolidating the driving force of the socialist cause.

After setting it as the strategic line to put the national economy on Chuch’e, modern and scientific basis, the WPK has organized and mobilized all the people in the struggle for implementing it and thus brought about a gigantic advance in attaining the ten-point long-term goal of socialist economic construction.

The WPK has waged a courageous struggle to defend and advance the socialist cause with the firm will to shatter the imperialists’ counter-revolutionary offensive with the revolutionary one.

At a time when the socialist cause was advancing victoriously along the orbit of Chuch’e under the rapidly changing situation and a bright prospect was opening up for national reunification, our party and people suffered the greatest sudden loss to the nation, the demise of President Kim Il Sung (Kim Il-so’ng) whom they trusted and followed like Heaven. It was a bolt from the blue.

The demise of Kim Il Sung (Kim Il-so’ng) was the biggest grief and loss to our party and people and the biggest trial for our revolution.

After the greatest loss to the nation, the imperialists and their followers have reached the height in their political and military pressure, moves for provoking a war and economic blockade. To cap it all, the country was hit by severe natural disasters, bringing untold hardships and trial to the economic construction and people’s living.

When the world was concerned about the fate of the DPRK and when the imperialist reactionaries were foolishly trumpeting about “change in line” and “collapse of social system”, leader Kim Jong Il (Kim Cho’ng-il) solemnly declared his iron will to invariably defend and carry to completion the revolutionary cause of Chuch’e started by the President no matter how arduous the road of the revolution might be, and wisely led the revolution and construction only as intended by the President and the way he did.

The WPK has bolstered up the People’s Army in every way, established state machinery centered on the national defense and transformed and adjusted all fields on the principle of So’ngun (military-first) as required by it.

Thanks to the heroic struggle of the service personnel and other people who turned out as one in close unity around the party, the DPRK won victory after victory in the protracted fierce confrontation with the imperialists and the US, victoriously concluded the Arduous March, the forced march and honorably safeguarded the security and the sovereignty of the country and socialism.

In the grim struggle for defending socialism, the WPK set forth the high goal of building a powerful socialist nation and waged a strenuous struggle, thus advancing the socialist cause onto a new higher stage.

At a time when historic changes were taking place in accomplishing the revolutionary cause of Chuch’e and Korean-style socialism was dynamically advancing along the road of victory indicated by the So’ngun (military-first) politics, our party and people suffered all of a sudden another greatest loss to the nation– the demise of Kim Jong Il (Kim Cho’ng-il).

All the party members, service personnel and other people seized with the profound grief over the loss of Kim Jong Il (Kim Cho’ng-il), overcame sorrow with strength and courage as befitting his soldiers and disciples and courageously turned out in the struggle to translate into a brilliant reality his lifetime plan and desire in close unity around the Party Central Committee.

At the 4th Conference of the WPK, it clarified the revolutionary faith and will to hold Kim Il Sung (Kim Il-so’ng) and Kim Jong Il (Kim Cho’ng-il) as eternal leaders of our party and the revolution and to uphold the great Kimilsungism-Kimjongilism as the eternal guiding idea, and aroused all the party members and other people to the drive for implementing the last instructions of the leaders.

As required by the prevailing situation and the developing revolution, the WPK advanced the strategic line of simultaneously pushing forward the economic construction and the building of nuclear force and worked hard for its implementation.

Thanks to the dynamic struggle waged by the army and people of the DPRK to carry out the strategic line of the party, a sure guarantee was provided for finally concluding the confrontation with the imperialists and the US and accelerating the final victory of our cause.

The WPK organized and waged an all-people general onward movement for building a thriving people’s paradise as planned and desired by the great leaders and thus ushered in the new era of the prosperity of the country.

The entire party and all the people have achieved the single-minded unity of the whole society in which they are united closely around the leader in thinking and purpose and sense of moral obligation. This is the great success and feat achieved by our party during the period under review.

Regarding it as its strategic line to attach importance to youth throughout the period of leading the revolution, the WPK has trained the young people as successors to the revolution who carry forward the blood line of Juche, thus building the youth power without an equal in the world.

A spectacular success made by the WPK is that it has implemented the So’ngun (military-first) revolutionary line, the military line of self-defense, thus turning the country into an invincible military power.

Our party and people dynamically waged the drive to implement the strategic line of socialist economic construction to lay firm material and technical foundations of self-supporting national economy and provide a springboard from which to build an economic giant.

The WPK has successfully settled the theoretical and practical matters arising in carrying forward the revolutionary cause and faithfully inherited and developed the idea and cause of the leaders.

View of the leadership platform during the second day of the 7th Party Congress on May 7, 2016 (Photo: Rodong Sinmun).

During the report, according to KCNA, Jong Un issues instructions and tasks “for developing the Korean revolution on a higher stage and accomplishing the cause of socialism by regarding the idea and exploits of the great leaders as eternal cornerstone.”  And continued the report:

It is necessary to model the whole society on Kimilsungism-Kimjongilism in order to accomplish the socialist cause and completely achieve the independence of the popular masses.

We should consolidate the position of the political and military power and fly the flag of victory on the eminence of scientific and technological, economic and highly-civilized power by accelerating the building of a thriving socialist nation and thus bring about a decisive turn in the struggle to model the whole society on Kimilsungism-Kimjongilism.

In order to successfully build a socialist power under the banner of modeling the whole society on Kimilsungism-Kimjongilism, it is necessary to strengthen the people’s government and enhance its function and role and, at the same time, thoroughly carry out the general line of our party to dynamically conduct the three revolutions–ideological, technical and cultural.

It is imperative to carry through the five-year strategy for the state economic development from 2016 to 2020.

It is necessary to further increase the might of the politico-ideological power and military power.

The WPK aroused all the Koreans to the struggle for national reunification based on the idea and line on independent reunification and the proposal for founding the Democratic Federal Republic of Koryo initiated by Kim Il Sung (Kim Il-so’ng).

The noble patriotic will for reunification of Kim Jong Il (Kim Cho’ng-il) and his bold decision resulted in two rounds of north-south summit and the adoption of the June 15 joint declaration and the October 4 declaration, its action program, guided by the idea of By Our Nation Itself, the first of their kind in the history of national division. This was an epochal event that provided a historic milestone for independent reunification and opened up a turning phase for national reunification.

We should consistently keep a firm hold on the three charters for national reunification which comprehensively deal with the will and requirements of all the Koreans and whose vitality was proved in practice and should pave the road for reunification.

Independence, peace and friendship are the invariable foreign policy tenet of the WPK and the principled stand to be maintained in the efforts for accomplishing the cause of global independence.

It is our Party’s goal to build a peaceful world free from war and it is the constant stand of our Party and the DPRK government to struggle for regional and global peace and security.

As a responsible nuclear weapons state, our Republic will not use a nuclear weapon unless its sovereignty is encroached upon by any aggressive hostile forces with nukes, as it had already declared, and it will faithfully fulfill its obligation for non-proliferation and strive for the global denuclearization.

The WPK and the DPRK government will improve and normalize the relations with those countries which respect the sovereignty of the DPRK and are friendly towards it, though they had been hostile toward it in the past.

Concluding the WPK Central Committee report, Jong Un noted that the WPK “has developed into the great and dignified Kimilsungist-Kimjongilist Party, opening up a new path in the building of a revolutionary party, and led the revolutionary cause of Chuch’e along the road of shining victory” and stressed that the party “should be strengthened into the eternal Kimilsungist-Kimjongilist Party and its leadership role be steadily enhanced to successfully carry out the important tasks for accomplishing the socialist cause, the revolutionary cause of Chuch’e under the banner of modeling the whole society on Kimilsungism-Kimjongilism.”  He called for “for rallying closer around the Party Central Committee under the revolutionary banner of Kimilsungism-Kimjongilism and dynamically advancing toward the strengthening of the Party, the accomplishment of the socialist cause, the independent reunification of the country and the realization of the cause of global independence.”