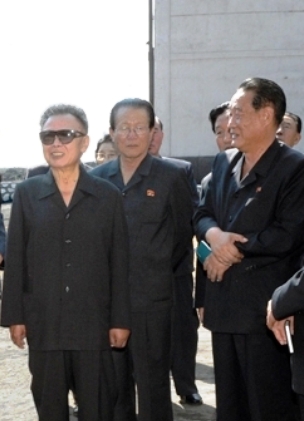 Pak Nam Gi (R) attending a guidance tour with KJI. Hong Sok Hyong (C) would replace Pak as director of planning and finance in the summer of 2010 (Photo: KCNA)

Pak Nam Gi is the former department director of the CC KWP Planning and Finance Department, a former member of the Party Central Committee and a past chairman of the State Planning Commission.  Pak earned a degree of notoriety when he was dismissed from his central party director’s position in early 2010.  Some Pyongyang watchers contend that Pak was held responsible by Kim Jong Il for implementation of certain economic policies and publicly executed.  Pak Nam Gi was a technocrat and held a number of economic management positions in the party and government.

Pak Nam Gi was born in 1928 in South Hwanghae.  He studied at Kim Chaek University and in St. Petersburg and Prague.  He began his career as a section chief in the party’s Commercial Planning and Finance Department in 1958.  In 1963 he became a deputy director at the Central Statistics Bureau.  He returned to the party Planning and Finance Department in 1969 where he worked as deputy director.

In 1972 Pak was appointed Vice Minister of Metal Industry, but was about a year leader became a bureau director-general (for design) in the Ministry of Construction and Building Materials Industries.  In 1976 Pak was appointed Vice Chairman of the State Planning Commission, where he devised part of the 2nd Seven Year Economic Plan.

In the early 1980s Pak began working as a director in the Second Economic Committee.  In 1984 he was elected to full membership in the Party Central Committee (CC KWP) and CC KWP Secretary of Economic Affairs.  In 1986 he was elected a deputy to the 8th Supreme People’s Assembly (SPA) and a member of its Budget Committee.  He was also appointed Chairman of the State Planning Commission.  He served briefly in the position before he was removed reassigned as a deputy director in the former party heavy industry department.

In 2005 Pak was appointed department director of the CC KWP Planning and Finance Department.   Pak was responsible for coordinating economic reporting to the central party (and KJI) and providing guidance and financial oversight between party and Cabinet departments and SOEs.  Pak presided over a significant restructuring of the party which included the transfer or layoff of numerous central party employees.  Pak regularly attended guidance tours with Kim Jong Il from 2005 to 2009.

Pak’s final reported appearance in Kim Jong Il’s entourage was to the Huichon Power Station in January 2010.  Pak’s final appearance in the DPRK media was his attendance at a rally in February 2010.  There are conflicting accounts about the circumstances of Pak’s removal.  Several reports allege that he was publicly executed, along side either a deputy State Planning Commissioner or deputy director of OGD.  There are other accounts that say Pak was dismissed from his positions and relocated out of Pyongyang.

Pak Nam Gi did not retain his CC KWP membership, as his name does not appear on the membership lists published by KCNA in September 2010.  Pak was highly skilled in mathematics and tutored several current DPRK elites, including Kim Kyong Hui, in the 1960s.