The DPRK’s only restaurant in Western Europe was rebooted and has reopened over a year after its first location closed.  The Haedanghwa Korean Restaurant  opened in the Rechtshuis in Watergraafsmeer in eastern Amsterdam, The Netherlands, in late December 2013 with nine employees from the DPRK (five waitresses, three cooks and a manager).    Haedanghwa offers a la carte and set menus of Korean cuisine, as well as a music revue by the wait staff.  This is the Haedanghwa Group’s second attempt at opening a restaurant in Holland.

The Haedanghwa Korean Restaurant at the intersection of Middenweg and Ringdijk in the Watergraafsmeer section of Amsterdam (Photo: Google image). 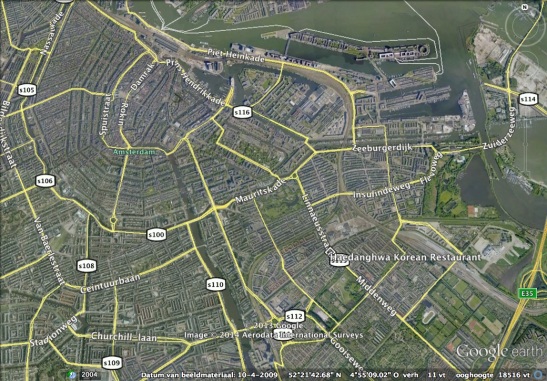 In January 2012 Haedanghwa opened the Pyongyang Amsterdam Restaurant in Osdorp in western Amsterdam.  It was owned and operated as a joint venture between the Haedanghwa Group and two Dutch nationals.  The restaurant closed seven months after it opened following a disagreement between the DPRK and Dutch co-owners and accusations that restaurant workers were being exploited and not properly compensated.  A year after the Pyongyang Amsterdam Restaurant shuttered, the Haedanghwa Group found a new partner, South Korean national John Kim, and moved to a larger location southeast of Amsterdam’s city centre.  Kim told Het Parool that “I want to show that the Korean people has more to offer than K-pop only. We are the counterpart of Gangnam Style” and that “I take good care of my staff, ethics is of paramount importance to me.  Because I speak the language, we understand each other well. They see me as an older brother.”

There are two DPRK-owned eateries currently operating in central and east European countries, and at least three restaurants have opened and closed in other European countries since 2000.  The Haedanghwa Group, a large corporation owned by several DPRK elites (including late leader Kim Jong Il’s sister Kim Kyong Hui), already operates two restaurants in China, as well as a restaurant and shopping center in Pyongyang.

One comment on “DPRK Restaurant in Amsterdam Reopened Under New Ownership”

This entry was posted on 01/21/2014 by nkleadershipwatch in Uncategorized.